This summer The Shouting Mute was commissioned for the Inside Out Dorset Festival 2018, produced by Activate Performing Arts. The piece was called Prose in the Park. It was a continuous sound and poetry installation, which remained in a section of Shelley Park for two days during the festival. The Prose In The Park installation was an interactive and immersive experience for audience members. Some described it as enchanting, ethereal and magical. Were you there? Let me know what you thought…

Our creative team had been working on this project for some months leading up to the festival, collecting public input during workshops, recording soundscapes and voices, researching the history of Shelley Park and exploring how all of these elements would come together. The last week of preparations was quite tough, but we would like to thank the whole team for all of their help, support, and hard work, with special thanks to Jason Warren from Axis Arts who oversaw rehearsals in the last week, Laura Dobles, who performed with The Shouting Mute, and Jonny Leitch, from Leitch Drums, our sound designer who created some beautiful soundscapes. Together, we pulled off The Shouting Mute vision for this project in style.

It was excellently magical and enchanting but I was the director of the piece so of course I would say that – Dave, The Shouting Mute

The sound and art installation was displayed along a long footpath and leafy green area with four interactive daily performances from The Shouting Mute and Laura Dobles. Live poetry was also read aloud during the walk. The audience loved it, and there were writing stations set up along the footpath as well as an inviting patch of blankets, cushions, and poetry books written by Shelley, where people could read, relax, and contribute their own poetry and creative responses.

It was such a well-received project that there is talk of adapting and continuing Prose In The Park at other venues in the future, so watch this space. 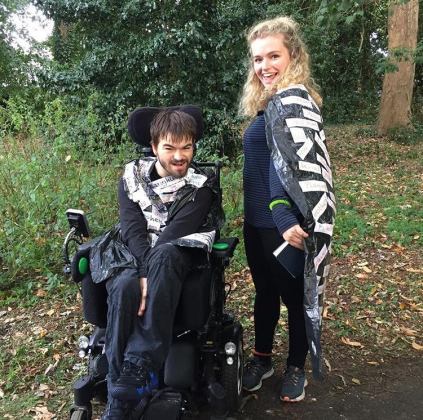 Performing at Inside Out Dorset Festival 2018